You are here: Home / Research

Almost all of the functions in a cell or organism can trace their beginnings to the cell nucleus with the turn on of a gene, processing of its RNA, and subsequent transport of that RNA into the cytoplasm where it is synthesized into a protein. Yet very little is known about how these events are spatially and temporally coordinated within the context of the nucleus to allow for the regulation of accurate gene expression; or how they go awry resulting in cancer. For example, while changes in nuclear organization have long been used as markers for the identification of cancer cells, relatively little is known about the direct cause or effect of these changes.

Research in my laboratory centers on understanding the spatial organization and regulation of gene expression within the context of the mammalian cell nucleus. In order to study the spatial and temporal aspects of gene expression we developed a live-cell gene expression system that allows us to visualize a stably integrated regulatable genetic locus, and follow in real-time transcription of that locus, including visualization of its mRNA and protein products in living cells. Using this system we are examining the recruitment of members of the gene expression and silencing machineries. We are also using this approach to assess the transcription of single copy endogenous genes. In addition, since embryonic stem cells cells undergo dramatic changes in transcription, chromatin structure, and nuclear architecture as they transition from a pluripotent to a lineage specific cellular program we are studying the dynamic movements and expression of critical genes during the onset of ES cell differentiation.

A second major focus of my laboratory is to identify novel mechanisms of regulating gene expression with the ultimate goal of developing new approaches to understand and treat cancer. We are focusing our efforts on a class of non-coding RNAs that are long (>1 kb) and retained in the nuclei of mammalian cells. We suggest that within this class of non-coding RNAs will be found a diverse group of key regulatory molecules that will provide significant insight into basic cellular functions, developmental regulation, and disease. Such non-coding RNAs may play a much more crucial role in physiological and pathological processes than currently anticipated. For example, mutations in non-coding regulatory RNAs may give rise to some of the phenotypes associated with specific diseases by altering gene expression at a specific locus or at a more global level. We are currently pursuing the function of several nuclear retained non-coding RNAs in breast cancer progression and development and are carrying out screens to identify additional interesting candidates. 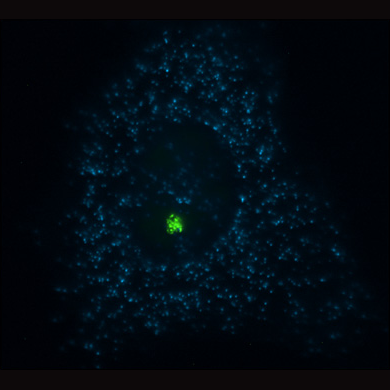 Live cell visualization of a stably integrated genetic locus (yellow/green) using the lac operator/repressor system and yellow fluorescent protein. In the transcriptionally active state the locus is decondensed and transcribes an RNA that encodes for a cyan fluorescent protein fusion that is targeted to cytoplasmic peroxisomes. Photo provided by Susan M. Janicki 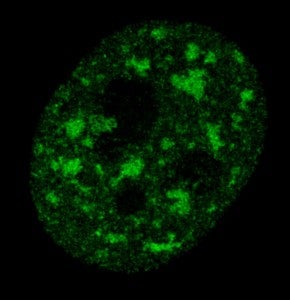 Speckles are subnuclear structures enriched in pre-mRNA splicing factors, located in the interchromatin regions of the nucleoplasm of mammalian cells. At the fluorescence microscope level they appear as irregular, punctate structures that vary in size and shape. When examined by electron microscopy they correspond to clusters of interchromatin granules. Speckles are dynamic structures and both their protein and RNA-protein components can cycle continuously between speckles and other nuclear locations, including active transcription sites. 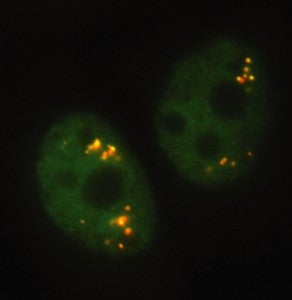 Long non-coding (lncRNAs) are emerging key factors in the regulation of various cellular processes. In the nucleus, these include the organization of nuclear sub-structures, the alteration of chromatin state, and the regulation of gene expression through the interaction with effector proteins and modulation of their activity. Collectively, lncRNAs form the core of attractive models explaining aspects of structural and dynamic regulation in the nucleus across time and space.